← more from
Thrill Me
Get fresh music recommendations delivered to your inbox every Friday.
We've updated our Terms of Use. You can review the changes here. 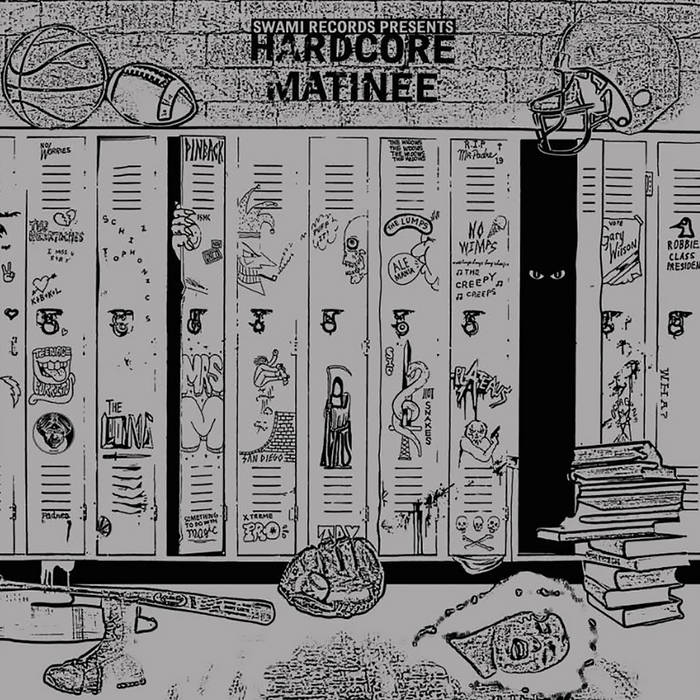 Hardcore Matinee is an ode to the budget, punk rock/hardcore compilations that proved to be informative in the early years of Swami Records head honcho, overlord, John Reis. Some of these budget, compilation LP’s were highly disposable, LP’s that shunned the concept of quality favoring instead the quantity of bands it included. 40, 50 sometimes up to 60 unknown groups were crammed onto these records that crackled and popped with tinny sound and infantile graphics. Over time, this cut-rate aesthetic actually weathered quite well. Call it nostalgia or perhaps it is a testament to how truly ugly the world has become, but some of these records can now be enjoyed as curious oddities of a bygone era. So, it was with this inspiration that Hardcore Matinee was assembled.

Hardcore Matinee features 22 of San Diego’s most exciting groups and covers the wide range of current punk music. From well-established bands such as Hot Snakes (with their first new recording since 2004 and featuring both drummers on the same recording), Pinback (their final recording before disbanding and then reforming) and Gary Wilson (off his recent collaboration with The Roots) to up and coming bands Octagrape (ex-Truman’s Water), Death Eyes (Hardcore supergroup with ex- Rat’s Eyes and ex-Death Crisis) and Schizophonics, this record’s varied styling is a jarring ride. The Swami Records harem is represented by the reformation of The Sultans (first recording since 2003), Beehive and The Barracudas (first new recordings since 2008), Mrs. Magician (an outtake from their soon to be released second album Bermuda) and The Heartaches (first new recording since their Too Cool For School LP). Other artists include The Loons (featuring Mike Stax of Ugly Things), Rob Crow, Teenage Burritos (Burger Records), Plateaus (Art Fag Records), Creepy Creeps (Dionysus Records), The Widows (Route 44 Records), Ale Mania (Volar Records), Ghetto Blaster (ex- Fishwife and The Let Downs), WHA (ex-Tourettes Lautrec) The Shake Before Us and The Lumps (both on Tower Bar Records) and the debut of The Soaks.

In order to vaguely adhere to the inspired aesthetic, it was important to keep the music fresh and moving quickly. All of the bands recorded new, unreleased material and attempted to keep their contribution as brief as possible. Hardcore Matinee showcases a cross section of some of Swami Records favorite, current San Diego noise and presents them in a blurred collection high on energy and momentum. The result is a record that plays as a whole and is greater than the sum of its parts.

Another important component of this record is to contribute to keeping the spirit of regional punk rock compilations alive for future generations. As a result, proceeds from Hardcore Matinee will be donated to The Museum School in San Diego and be used exclusively for their music department. The Museum School is a tuition-free, public charter school that serves students from all over San Diego in Kindergarten through 8th grade.


Because I realize your time is valuable, for your convenience I am including a brief description of the specific, PUNK sub-genre of each track on the record.

6. The Creepy Creeps - Knife On A Stick (Land Of The Lost Punk)

7. Ale Mania- Warp Through The Other Side (Herbal Ecstasy Punk)

9. Shake Before Us - Nobody Wants To Know (Teamwork Punk)

Bandcamp Daily  your guide to the world of Bandcamp